AID STATION: The "You Can't Get Any Easier Than This" Vegetable Soup

I'm having some girls over tonite for dinner and because I'm a horrible cook, I need to stick with easy dishes.  I've been on such a soup kick all winter, primarily because several years ago my best friend gave me a pressure cooker, which I only recently realized was awesome for making soups.  I was scared to use the pressure cooker for the longest time because I was afraid I'd blow up something. But a few months ago I finally read the instructions and it's easier than I though.  Plus, it allows me to make soups much more quickly.  One of my favorite soups I've been making is a very simple, but quite delicious vegetable soup that not even I can screw up.

You Can Get Any Easier Than This Vegetable Soup 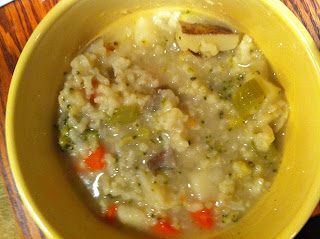 I really don't have any measurements for this...You basically throw in as many veggies as you want, but here are some suggestions.  This makes enough for me to eat over several nights (so probably enough for a family for one night) or you can also freeze it.


In a large soup pot or your pressure cooker, saute the chopped onion in the oil for 3 minutes, the add the garlic and saute for another 2 minutes.  Then, throw in all the veggies, the potato, rice, bay leaf, and veggie broth. Bring to a boil, then simmer until all the veggies and the potatoes are soft - maybe 25-30 minutes. Or cook according to your pressure cooker directions.  When the soup is ready, I add a couple splashes of soy sauce - just gives it a little more flavor.  Don't forget to remove the bay leaf before eating!

Posted by Life Through Endurance at 9:11 AM