THE RACE: The Stupid Stooper

I have the following sign up in my office, which is a spoof on the movie the Sixth Sense, where the little boy is telling Bruce Willis that he sees dead people: 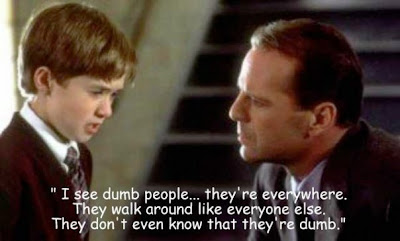 Some days more than others that spoof is particularly true.  Sometimes it seems like stupid people are popping up everywhere like zombies in a horror movie....walking around in what I call a stupid stooper.  Plus, the holiday season really seems to bring out the stupidity in people.

Today as I'm driving on the Route 7 cluster in northern Virginia on my way back from Home Depot, I asked myself what in the hell I was thinking coming out in this mess. I almost got run over by some ding-dong yapping on his phone as I was in the cross walk in the parking lot.  I saw parents wandering clueless down the Home Depot aisles, leaving their children unattended in the shopping carts to rip items off the shelves. People parking illegally, blocking traffic right in front of the door, with their hazard lights on, waiting for someone to come out of the store.  And - one of my biggest pet peeves:  the people who are oblivious to the concept of "right of way" at a four-way stop sign.  Apparently, "right of way" isn't on the driving test for people in the Washington, D.C. metropolitan area because 9 times out of 10 when I roll up to a four-way stop sign to the right of another driver, at the same time or just before him/her, they don't yield the right of way.

So as I'm lamenting the time I wasted on my Sunday afternoon Home Depot jaunt, I started thinking about how thin my patience had been lately.  Although there may be a variety of factors at play, what I realized is that I was having a bit of a superiority complex.  While running around cursing at all the stupid people around me, I'd forgotten that I myself have been guilty of the stupid stooper...maybe just once or twice.  I thought back to Ironman Arizona when I barked at several people who were passing me on the bike ride on the wrong side.  In most triathlons, the applicable rules say that you can only pass someone on the bike on their left and that you're supposed to announce that you're passing.  I'm notorious for scolding people in a race or on the bike trail when they don't announce that they're passing. During Ironman Arizona, there were several people who got a couple of choice words from me as they not only passed me on the wrong side, but did so without even announcing themselves.  Did they not know the rules, or did they know and just not care?  Either way - stupid!  But today, I remembered when I had a similar bout of stupidity during the Chicago triathlon last year.  The Chicago triathlon uses different rules than most other triathlons and, for whatever reason, I hadn't read them.  I thought "how different could they be?"  So as I was flying down Lakeshore drive, yelling at people "on your left," wondering why everyone was riding on the wrong side, someone actually yelled back at me "You're supposed to pass on the right!"  It took two other people yelling at me to realize that the Chicago rules were the opposite - I was supposed to pass on the right.  Who was the idiot then?

How many of us have honked at someone who sat for 2 seconds too long at a red light?  And how many of us have actually been the person who sat too long at the red light?  How many times have you yelled at someone for talking on their cell phone without the handsfree device while driving?  Yet, how many of you have been guilty of picking up your cell phone in the car for just 10 seconds without the handsfree?  Ever gotten annoyed with someone walking at snails pace in front of you, gabbing to their friend?  Yet how many times have you been enjoying the company of a friend while just slowly strolling down the street?

The point is this:  We're all guilty of the stupid stooper, at least once in awhile.  Yet, when you're chewing out some other person for being a ding-dong, it's easy to forget that you too have been just as much of a ding-dong at some point in time.  You're not perfect, and neither is the person whom you're calling a ding-dong.

During the holidays we're all stressed and a little short on patience.  But the next time you find yourself annoyed with another driver, the person next to you on the metro, or some store clerk, try to remember that everyone has their moments - including you.  In the spirit of the holidays, try to have a little empathy and think about how stressed or in a hurry that other person may be.  Remember that you too have had many a brain fart, just like the person who's annoying you.  Be patient, laugh it off, wish them a good day, and move on...then maybe the next time you forget to read the rules or you ignore the four-way stop sign, the other person whom you've just annoyed will return the patience...
Posted by Life Through Endurance at 9:01 PM