AID STATION: Say it With Me: Keen-wah

As a vegan I've learned to be creative and resourceful with the foods I eat to ensure that I'm getting adequate nutrition, particularly for all the triathlon training I do. It's not as hard as some people think, and yes, yes, yes I get plenty of protein. In fact, early in my Ironman training I kept track of all my nutrition and I was getting way more protein and calories than most meat-eaters. Being a vegan (at least a healthy vegan - there are unhealthy vegans who eat a lot of junk food) just requires more intentional and thoughtful eating and a wealth of knowledge about what foods provide which nutrients.  Not that meat-eaters aren't knowledgable about their food, but being a vegan seems to require a little more planning.

One of my staple foods that's phenomenal for non-vegans as well as vegans is quinoa. If you're from the Midwest (like I am) you're probably pronouncing this like it looks: kwi-noah. (We midwesterners like to sound out our words. When I first moved to DC I thought "Pilates" was pronounced "PIE-lates," with the "lates" sounding like when you're tardy rather than when you're ordering a coffee). But alas, quinoa is pronounced keen-wah. It's too bad that such a power food has such a hard-to-pronounce, foo-foo name. Quinoa is anything but a wimpy, foo-foo food. It's cheap, easy to cook, tasty, and nutrition-packed.  Quinoa is protein powerhouse and actually is a complete protein because it has all nine essential amino acids.  Although quinoa often is referred to as a supergrain, it's actually a seed that, when prepared, is fluffy, with a slightly crunchy texture and nutty flavor.  You can buy quinoa in pre-packaged containers or in the bulk bin.  Please note that before cooking quinoa, you should wash it thoroughly to remove resins that coat the quinoa seeds and can give it a bad taste if not washed off.  I usually put the quinoa in colander with holes small enough so the quinoa won't wash through. 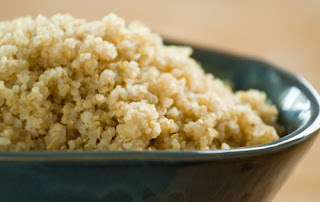 Here are a couple of my favorite quinoa recipes and their nutritional information, courtesy of Whole Foods Recipes:

Rinse quinoa and drain it well. In a large skillet, heat oil over medium heat. Add chives and cook, stirring frequently, for 1 minute. Stir in quinoa and stir 2 to 3 minutes or until the skillet gets dry. In a separate pan, heat vegetable broth to a simmer. Add hot broth, salt and pepper to the skillet. Reduce to a simmer, cover, and cook 20 to 25 minutes or until quinoa is tender. Stir in cherries and pecans.

Soak sundried tomatoes in hot water to cover for 15 minutes to soften them, then drain and chop. Bring 1/2 cup broth to a simmer in a medium pot over medium-high heat. Add onion and garlic and cook for 5 minutes. Add chopped sundried tomatoes, remaining 1 cup broth, wine and lemon juice and bring to a boil. Stir in quinoa. Reduce heat and simmer, covered, for 20 minutes. Arrange broccoli on top of quinoa, cover and simmer for an additional 10 minutes. Remove from heat and toss gently to combine. Serve garnished with cashews and green onions.

Posted by Life Through Endurance at 10:08 PM