I've been a vegan for over three years now (or maybe four - I've lost track) and was a vegetarian for a year before that.  Having grown up in Nebraska, you can imagine what a shocker that was for my family and friends.  For various reasons that I won't get into now, it's something I feel strongly about for my own personal well-being.  In a nutshell, I have moral, religious, environmental, and health reasons for choosing to be a vegan. It's a personal choice that I researched before making the decision and continue to research all the time.  I'm not perfect, although I try my best.  Sometimes though, there are things that would never occur to me as being un-vegan.  For example - Worcestershire sauce.  I never knew until my boyfriend pointed it out to me that Worcestershire sauce had anchovies in it!  So I found a vegan version.  Starbucks pumpkin spice lattes with soy milk - the pumpkin mix has milk in it.  Who knew?? Anyway, I'm not perfect (shocker, I know) and there are things for which I make an occasional exception (like my Grandpa's hot cocoa mix recipe during Christmas, which has powdered milk and chocolate pudding mix, for which I haven't been able to find any substitutes).

At any rate, I'm not a pushy vegan, I don't get grossed out when other people eat meat around me, and I certainly don't expect anyone to have to adjust their eating preferences because of me.  By the same token, I don't expect people to give me a hard time about being a vegan or criticize me for my personal choice, which has no impact on them.  I think we should all be respectful of other people's informed opinions.  (If you have a knee-jerk, uninformed opinion, then you'll have a hard time getting any respect outta me for that opinion...)  For those reasons, I want to make sure that I try to account for everyone's personal choices in writing this blog.  There definitely will be recommendations that I make and personal views that I espouse - and you don't have to accept or agree with any of them; but, because I have to assume that my blog will reach a diverse audience (hopefully it'll reach more than the four followers I currently have!), then I want to make sure that I'm putting forth something that most of that audience will want to read or try.  With that in mind, all of the recipes that I recommend will be vegan, but obviously the meat-eaters or vegetarians can substitute to fit their preferences.

So here's an awesome pasta recipe that I highly recommend everyone try as the vegan version, but if you're totally adverse to that, you can make it to suit your meat or dairy preferences.  I got this recipe courtesy of Sarah Kramer's Vegan A Go-Go book (page 100), which is amazing and has simple recipes that even I don't screw up.  This recipe is a great way to perk up your pasta for the fall. 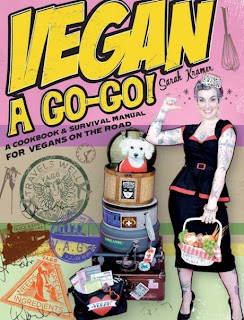 Punk-kin Pasta
In a large pot of salted water, boil the pasta.  While pasta is cooking, in a large saucepan on medium-high heat, saute the onions and "sausage" in the oil until onions are translucent.  Add the pumpkin, salt, and pepper and simmer for 5-7 minutes.  This sauce can be quite thick, so to thin it out, add 1/4 cup stock at a time until you've reached the desired consistency.  When pasta is cooked, drain noodles and return to pot.  Add the sauce to noodles and toss well. Serve immediately garnished with "cheese."  Makes 2 large or 4 small servings.

Let me know if you make this and how you liked it!
Happy eating!


Posted by Life Through Endurance at 1:23 PM