THE RACE: They Used to Think The World Was Flat...

I recently had a conversation with the founder of Buy Kind - an online vegan food home delivery store. We were talking about how much the thinking has changed over the past couple of years concerning veganism and how so many people are becoming more aware of animal welfare issues.  She said something that really registered with me:  "Well people used to think the world was flat too." And look how wrong that proved to be. So it got me thinking - how much do we limit ourselves by our current thinking or beliefs? 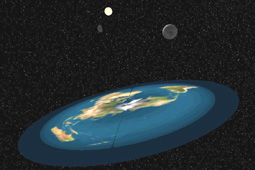 It seems that with almost every endeavor I've set out to do, I've said at the beginning "I can't do [insert next step in the endeavor]." When I started running almost 15 years ago, I said there's no way I could ever run a 5k. But I signed up for my first 5k and, despite my initial belief, I finished.

That "I can't" thought process continued with every new distance.  As I had more running experience under my belt and worked my way up the race distances, I still swore over and over that I could never run a marathon.  I ran two Marine Corps Marathons.

The same process ensued when I started doing triathlons.  I never thought I could - or would want - to do an Ironman.  But I did.

Growing up in Nebraska, I never thought I'd stop eating meat. But after working on a horse slaughter case for a pro bono client of mine and watching tons of slaughter footage, I changed my mind. Then, of course, I said I could never go vegan - going without cheese would just be too hard.  But after a year of vegetarianism, I decided (for several reasons) to become a vegan.

Whatever the endeavor - running, triathlons, veganism, buying a new house, starting a blog - I always thought initially "I'd never."  I basically thought of my world as flat, always one dimensional, never considering the possibility - or actually the endless possibilities - of a different mindset.  Much like those who historically thought the world was flat, I based my thinking only on my experience and what I could see right in front of me.  But I've realized that what you perceive to be the edge of the world, may actually be just the beginning.

I constantly have people saying to me "I could never do an Ironman" or "I could never do a marathon."  My response:  actually, yes you can.  I truly believe that virtually anyone could train for a marathon or Ironman.  I've seen people of all shapes, sizes, and backgrounds doing amazing things.  So, not to take anything away from the accomplishment of doing an event like that, but it's really not the physical impossibility that so many people think it is.

Henry Ford said "Whether you think you can, or think you can't - you're right."  Sometimes, all it takes to change an "I can't" to an "I can," is to take a baby step in the right direction.  I didn't decide to do an Ironman or a marathon on a whim.  I took baby steps by doing every other distance first, and then using that experience to decide that yes, I can.  I became a vegan only after I'd been a vegetarian and had a better idea of what that choice would mean.

If you're trapped in a flat world where you constantly think "I can't," then dip your toes into the ocean.  If you want to run a 5k - regardless of whether you think you can right now - then step outside and run down the block. Then run a couple blocks, then a mile, then two, and before you know it, you'll have 3.2 miles in the books.  From that point on, it's all a matter of perspective.  That first block will seem like nothin'.  And when you get to the point that you're running your first marathon, that first 5k will seem like nothin'.

Whatever it is that you think you can't do, it's time to re-evaluate your assumption.  If no one had re-evaluated the assumption that the earth was flat, we'd live in a very one-dimensional world.  So change your perspective, challenge the assumptions you've made about your abilities, and start trying to change your "I can't" to "I can."  Take baby steps if you have to...I promise that you won't fall off the edge of the earth...

What do you think you "can't" do?  How can you start to change that assumption?
Posted by Life Through Endurance at 10:24 PM

This post was just awesome. I needed to read it as I've been in a "flat world" perspective for a few weeks now. Thanks!

Thanks, Jen!! I really appreciate your comment and it means a lot to me that you could relate to the post! I hope that you can step out in the New World soon!